Mickey and Minnie Through the Years 1955-Present

UPDATE: There's an updated version of this post. Here's the link.

I have a great passion for costumes; and the Disney ones are one of my favorites. I want to write about how costumed characters changed over the years. I know some websites have done it, but I want to explain with greater detail.

I will be explaining how the Mickey Mouse and Minnie Mouse costumes changed over the years. For the sake of time I will the discussing the costumes from 1955 and present. Prior to 1955 the were many variations of Mickey and Minnie costumes. There's so many, it's hard to keep up accurately. Let's start at 1955.

1955-1959: The Ice Capades
Walt Disney opens Disneyland. For opening day Mr. Disney wants his characters to roam the park, so he barrows costumes from The Ice Capades. The Ice Capades has been making Disney themed shows as early as 1950. Disney loved the idea of characters roaming the park and greeting people, so he decided to keep the characters around. 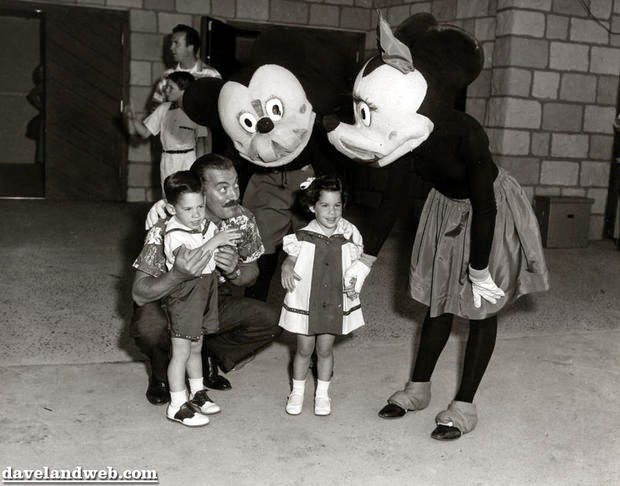 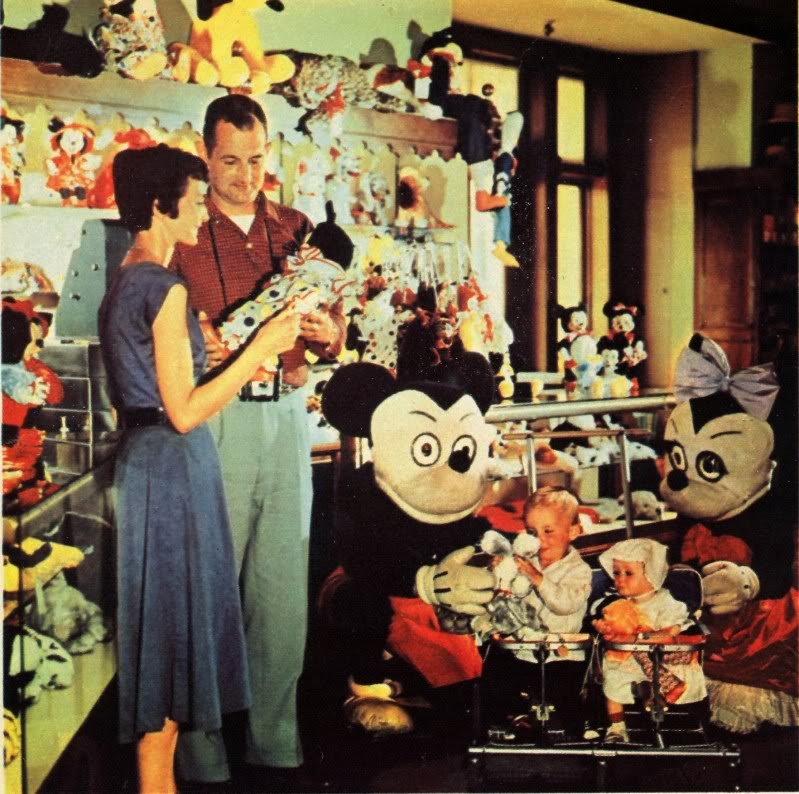 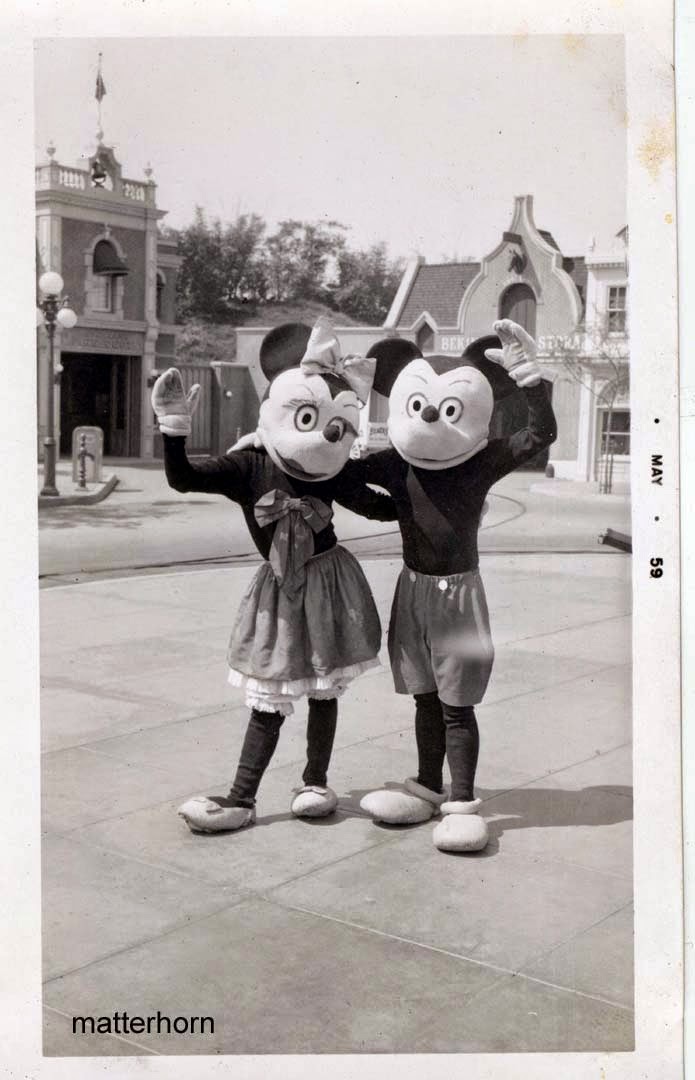 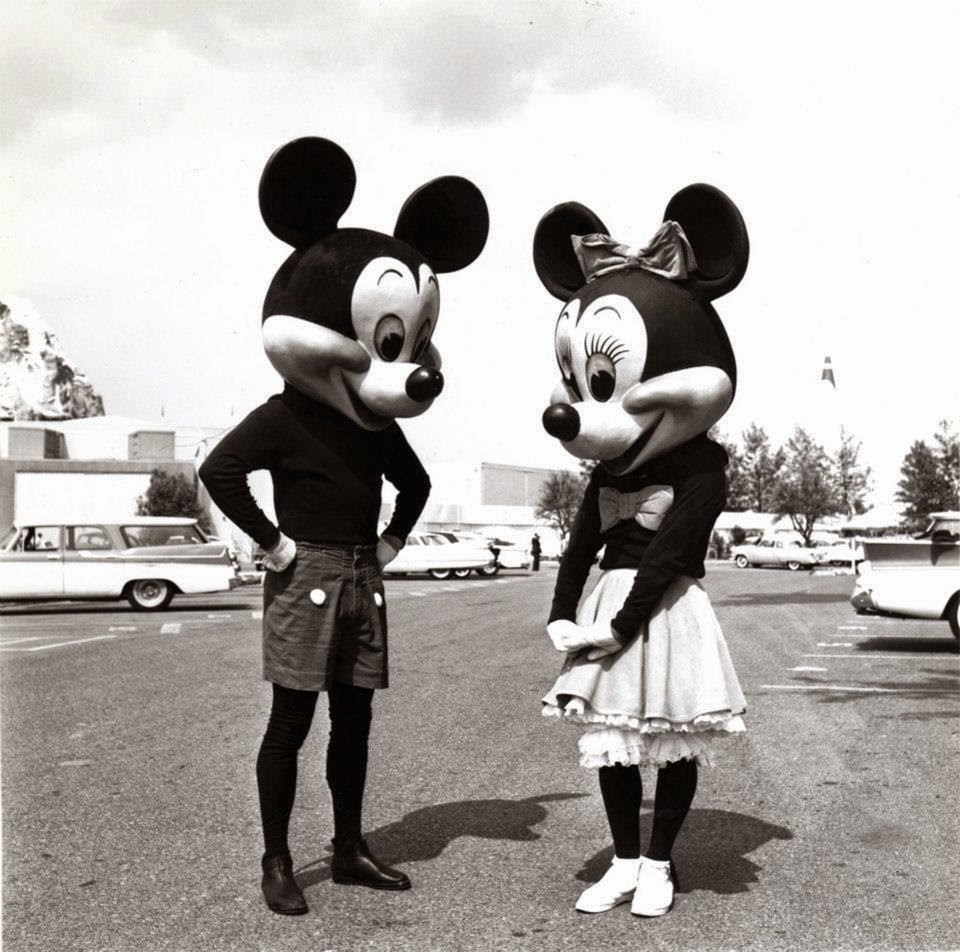 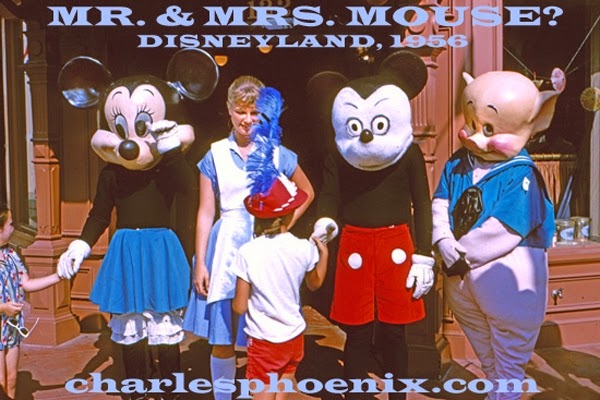 1960-1963: Big Head Era
At this period they redesign and created many Disney character costumes, eliminating the Ice Capades versions. Many costumes were designed so the character's head would take over half of the performer's body; starting the Big Head Era. Characters like Mickey, Minnie and others were Big Head characters. This was great because the characters look cartoony and less scary (debatable). But Mr. Disney noticed that the performers in the Big Heads (specially Mickey) could not interact with guests with freedom and ease. Kids started to doubt the character's "real-ness". An order was placed to redesign Mickey and a few others. 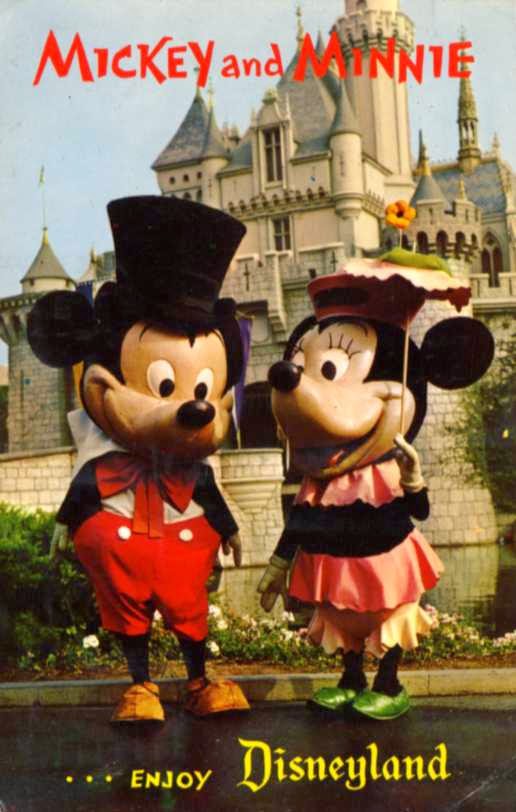 The Big Heads at Disneyland teicharchives.blogspot.com 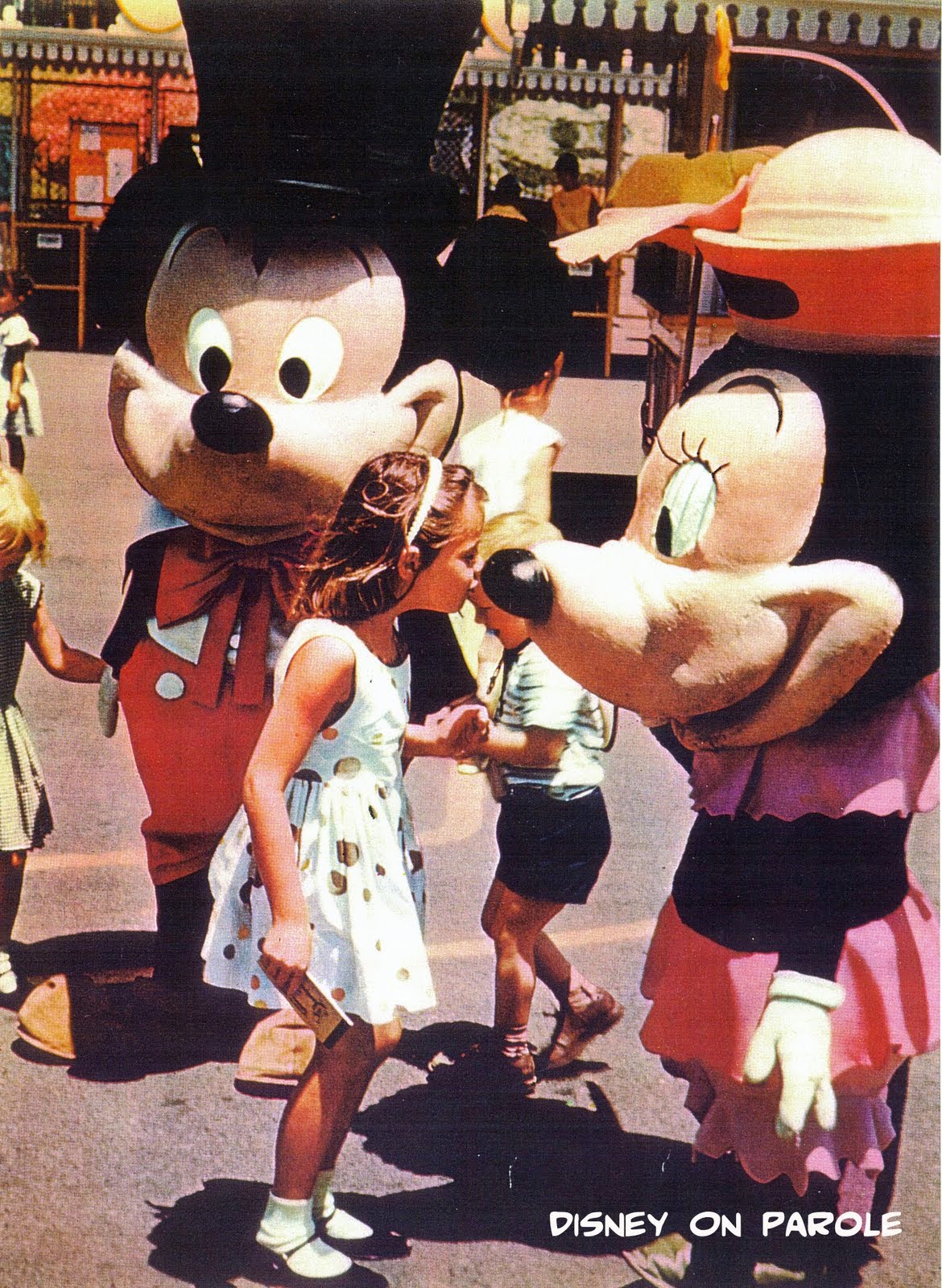 1962-1977: The Common Mickey
A new Mickey and Minnie costume was created. Completely different to the previous ones. The mold created for this style of Mickey and Minnie was used until the late 80's. On another note, Mr. Disney wanted Mickey to have a consistent performer and he found a man named Paul Castle. Mr. Castle (1923-2010) was a professional figure skater and performed on the Disney Ice Capades (coincidence?). He was a short man, about 4' 6" tall. Walt hired Castle to be the main Mickey Mouse performer. When ever Walt went somewhere, he took Mickey and Paul was always the performer. Paul Castle performed as Mickey at Disneyland and other events for over 25 years. To read more about Paul, click here. This style of Mickey was used at Disneyland, Disney World and Disney on Parade. While Mickey had a constant wardrobe, Minnie had several wardrobe changes during this time. 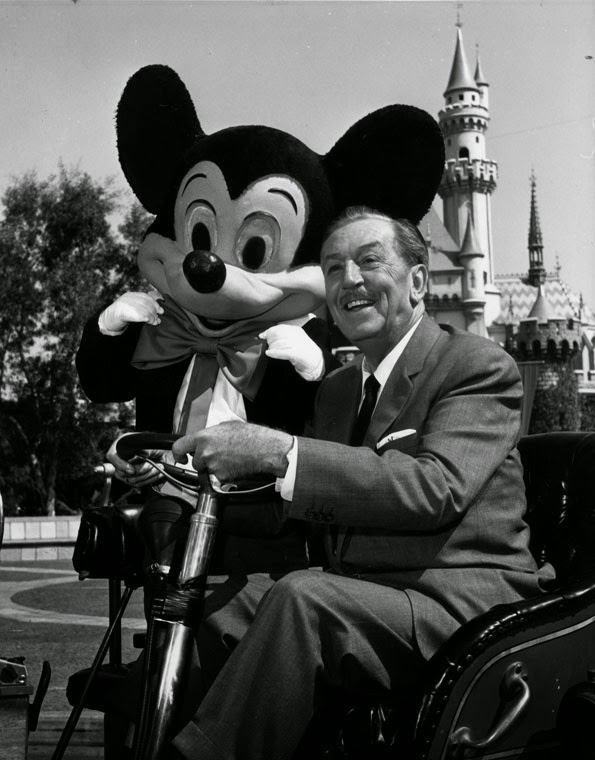 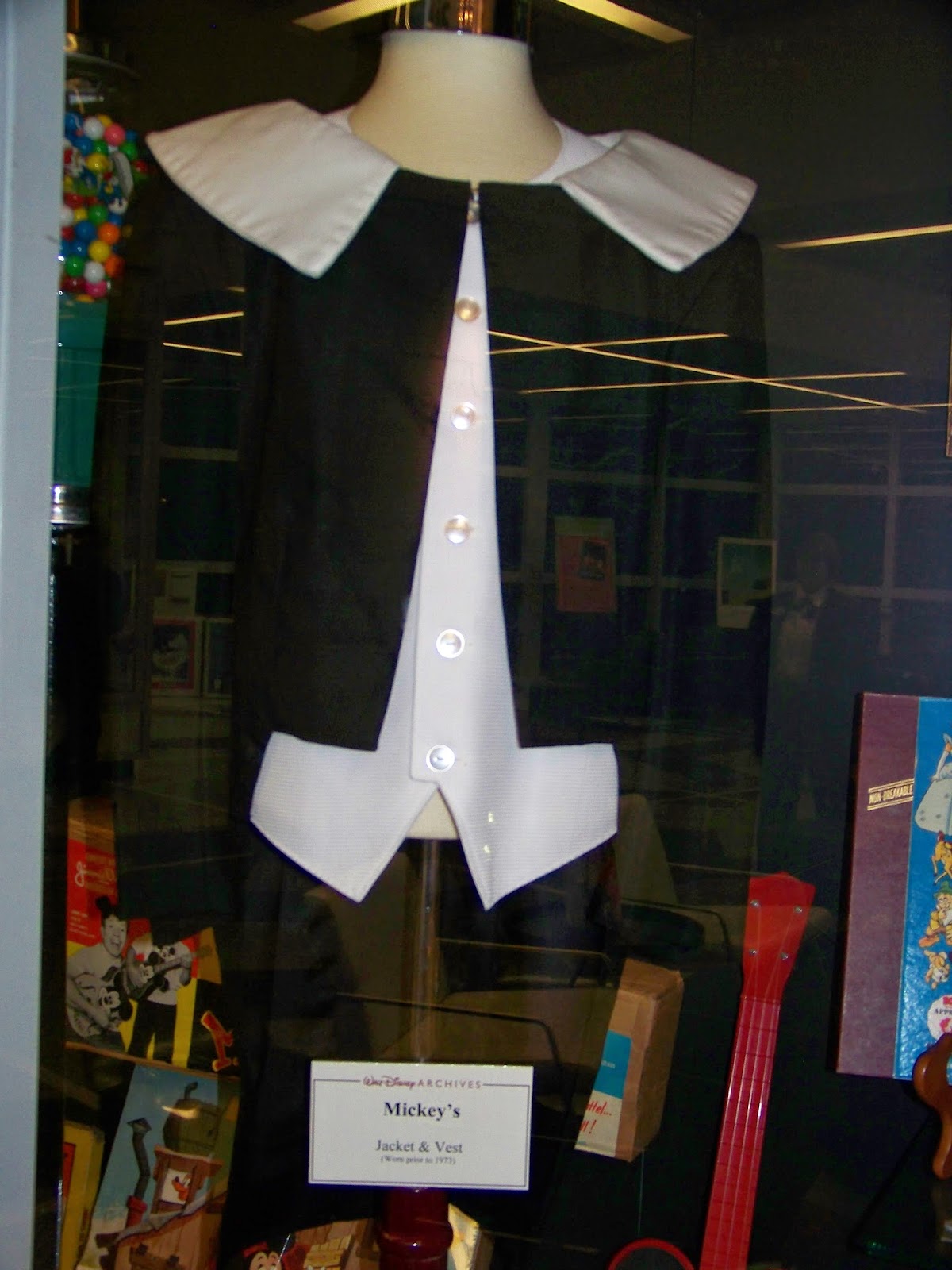 1968-1974: Bootleg Mickey
There's little known facts about this particular Mickey. Mickey's head almost looks like a bootleg version, but trust me it's an "official" Mickey. This Mickey rarely appeared. It was used to celebrate Mickey's 40th birthday outside of Disneyland and to promote Disney World outside of the U.S. Bootleg Mickey with Goofy and Pluto, 1970

1964-1975: Steamboat Minnie
This Minnie's wardrobe was styled over her first appearance in Steamboat Willie and the previous Big Head Minnie. She had a pink skirt, with cartoony bloomers, a pink collar and a pink hat. During this point Minnie is rarely seen by guests. This Minnie mostly only appeared on parades and special events. After 1970, this Minnie version was retired, but Disney on Parade used a similar style of this Minnie version. Minnie in Disney on Parade spotted yellow high heels with a red skirt with yellow polka dots. She also wears a red hat with a flower sticking out. 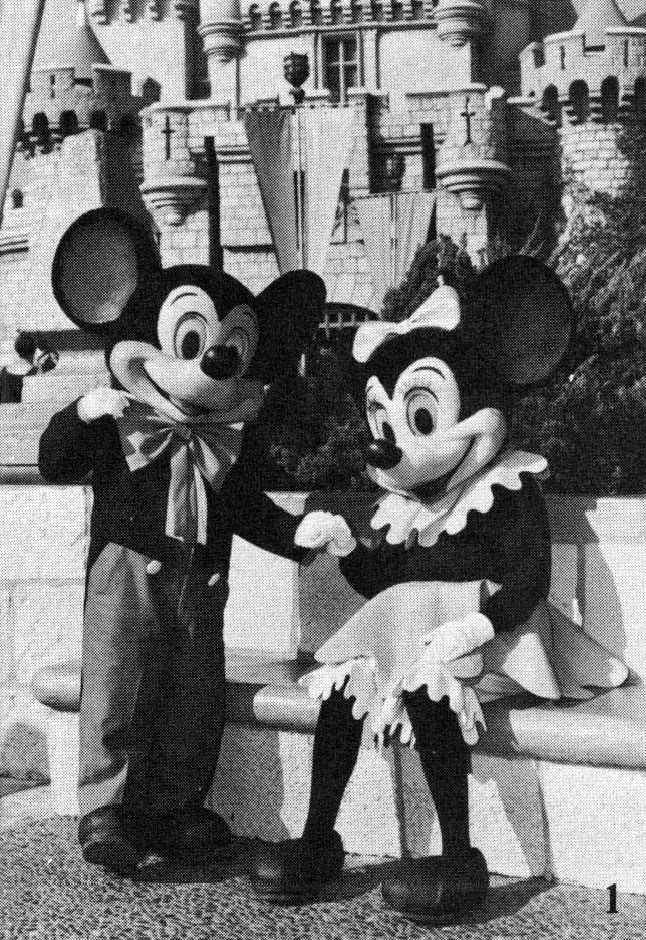 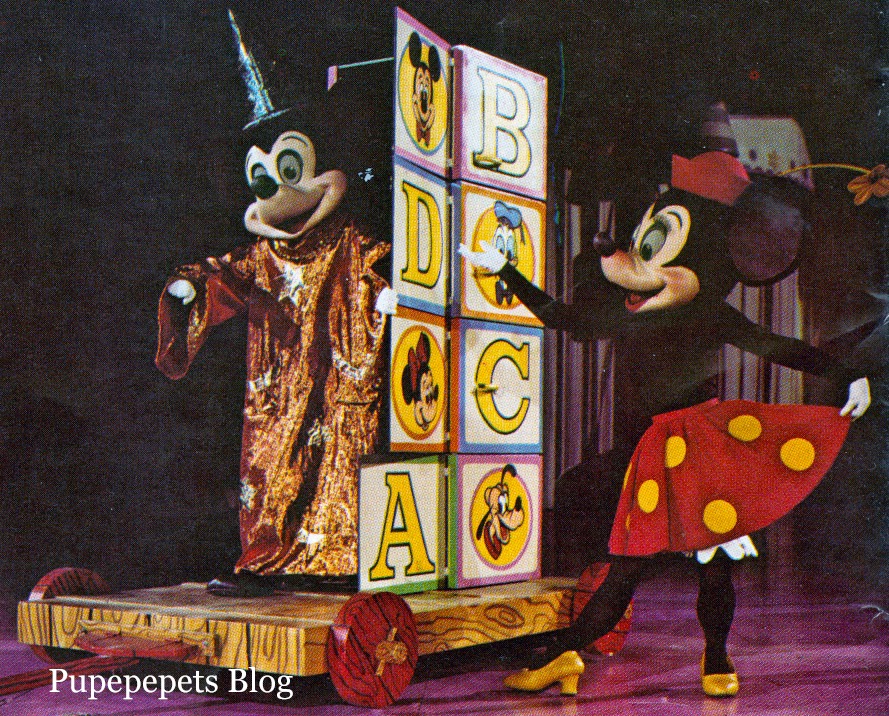 Sorcerer Mickey and Minnie in Disney on Parade, 1973.

1969-1977: Yellow Dress Minnie
Minnie changed to a more decent attire and now joins Mickey to greet guests. Here she wears a bright yellow dress with red trimmings and a red bow going around her head. This is my favorite Minnie from this era. 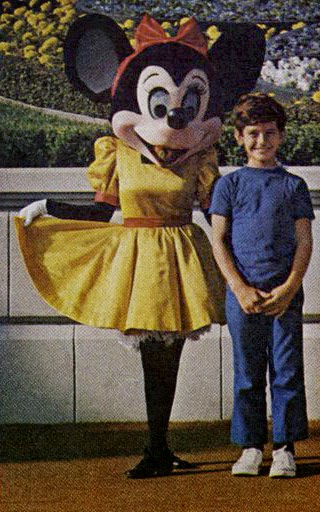 1976-1978 & 1984: Pre-Polka Dot Minnie
This Minnie I call "the pre-polka dot" dress Minnie, because this dress is almost a prototype to Minnie's now iconic polka dot dress. This Minnie wears a small polka doted red skirt with matching top, a straw hat with polka dot trimming and a flower. This style of Minnie only lasted 2 to 3 years before the next change.

French singer Douchka included Disney characters in her singing repertoire. In 1984, she made a music video called "Elementaire mon cher Baloo" (Elementary my dear Baloo) and Minnie appeared in this attire, minus the hat with was replaced by her traditional bow and she was wearing four fingered gloves. 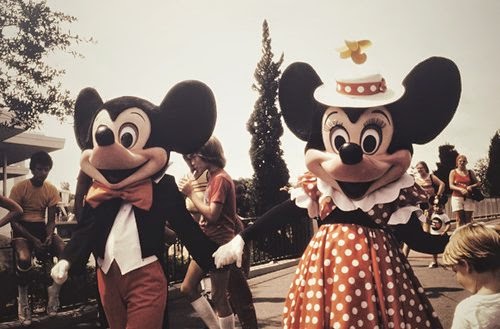 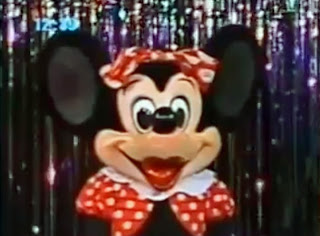 1978-1992: The 80's Version
To celebrate Mickey's 50 birthday, the company updates Mickey and Minnie. The Mickey/Minnie heads now better looking, but still using the same molds as before. Mickey gets a new suit and trousers. The trousers were patted to look round around the belly and hips. His shoes are now mascot shoes and his gloves are four fingered. They previous version had semi-custom shoes and five fingered gloves. The learn more about Mickey's gloves, read my previous post. Mickey spots black eye liner around his eyes. This was used on the previous Mickey and was applied to this Mickey. They added the black eye liner to make Mickey's eyes stand out, pop out. So kids and adults would make direct eye contact with Mickey. I call this Mickey, Emo Mickey. 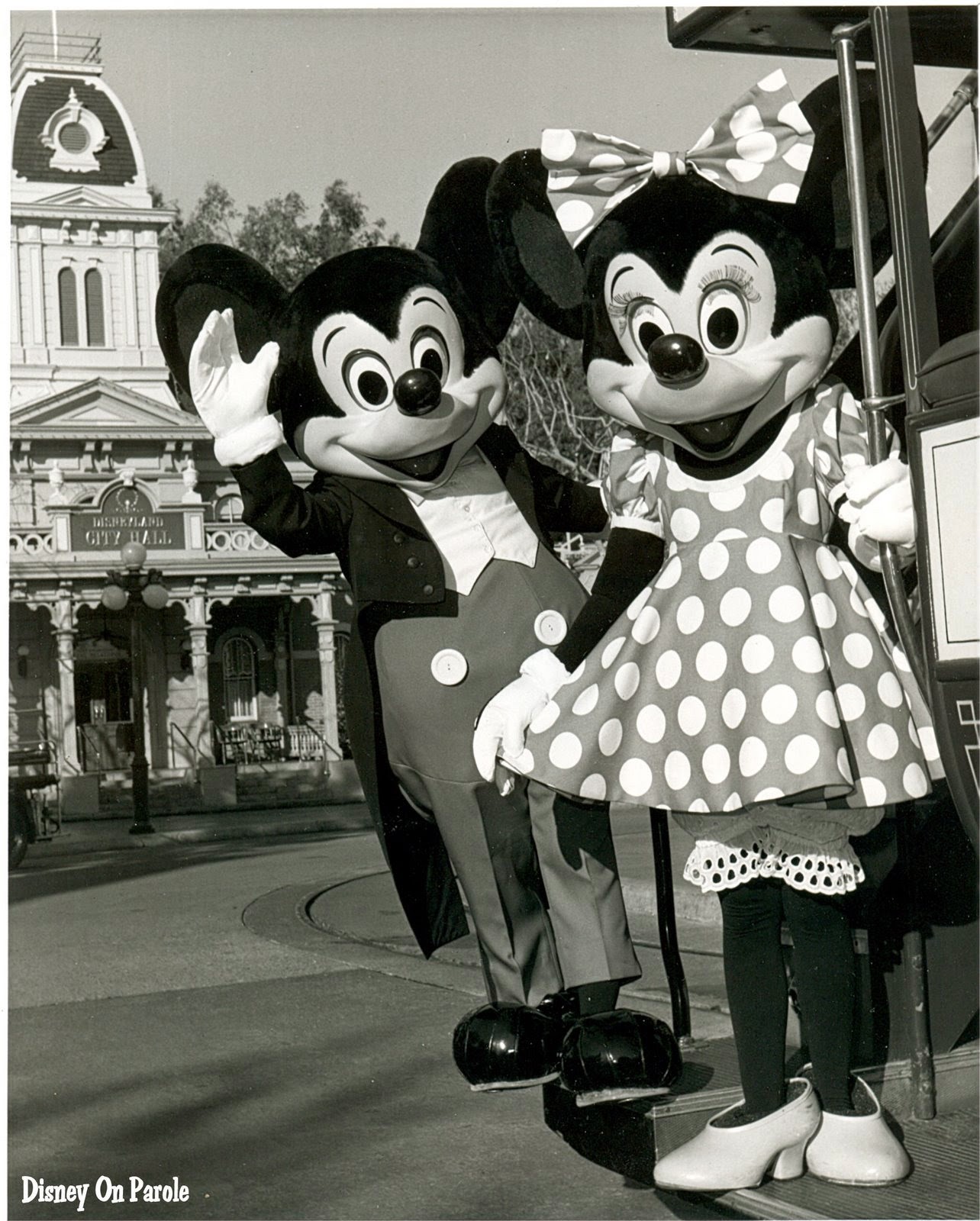 1986: Western Winkin' Mickey
Its been brought to my attention that in a Disney World commercial from 1986, Mickey winked at the camera. This is certainly not cgi, this Mickey head was modified to have a winking mechanism witch the performer controlled. I spoke to someone that performed at Disneyland during the 80's and she recalls this Mickey being used for special televised events and private events. By the looks of it, this Mickey only winks (right eye) and doesn't fully blink with both eyes closing. Maybe this was a "winking only" Mickey and had another that fully blinked.

Winking 80's Mickey footage, slowed down. video
Special thanks to Brandon for sending me the footage.

1987-Present: Modern Minnie Mouse
Since the dawn of cartoons, the male's girlfriend would always be the same male in drag. The Minnie head was the same head as the Mickey; with added red lip stick, lavender eye liner and puffy eyelashes. But someone (probably someone from Feld Entertainment) said: "Hey, we need to something about Minnie!" Disney created a new head for Minnie, with smaller ears, smaller nose and smaller widow's peak. Completely different to the Mickey head. Shortly after that, Disney redesigned Mickey's head after Minnie's new head. 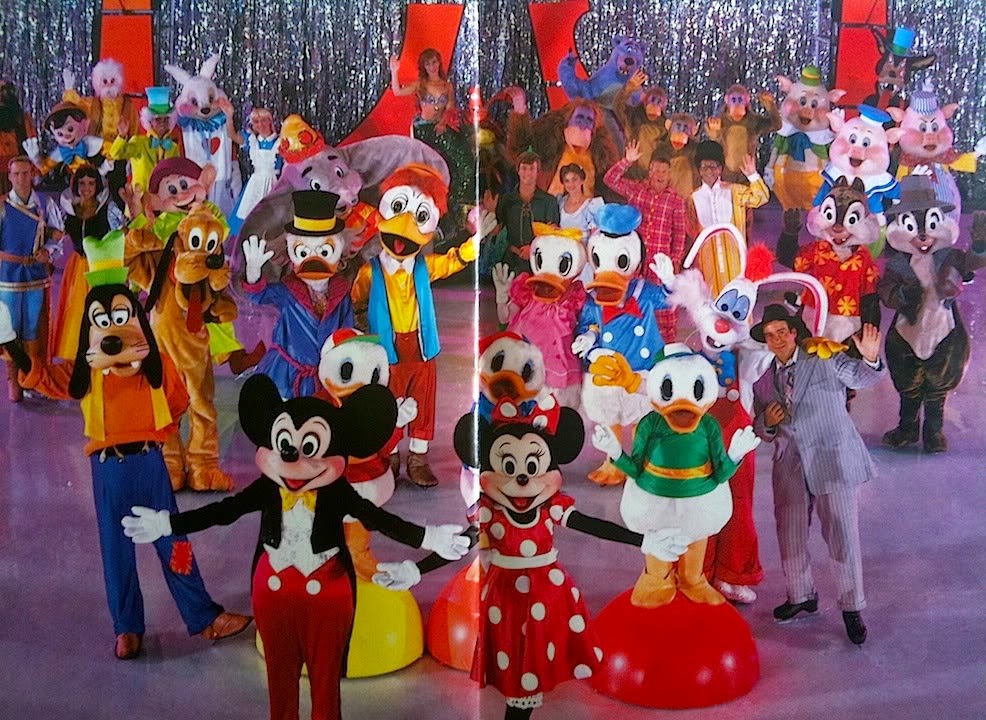 1987-Present: Modern Mickey Mouse
It's Mickey's 60th birthday celebration and since Minnie got a make over, so did Mickey. Nothing much changed, only a few changes like the new head design and Mickey loosing his black eye liner. This design of Mickey and Minnie are still used today. 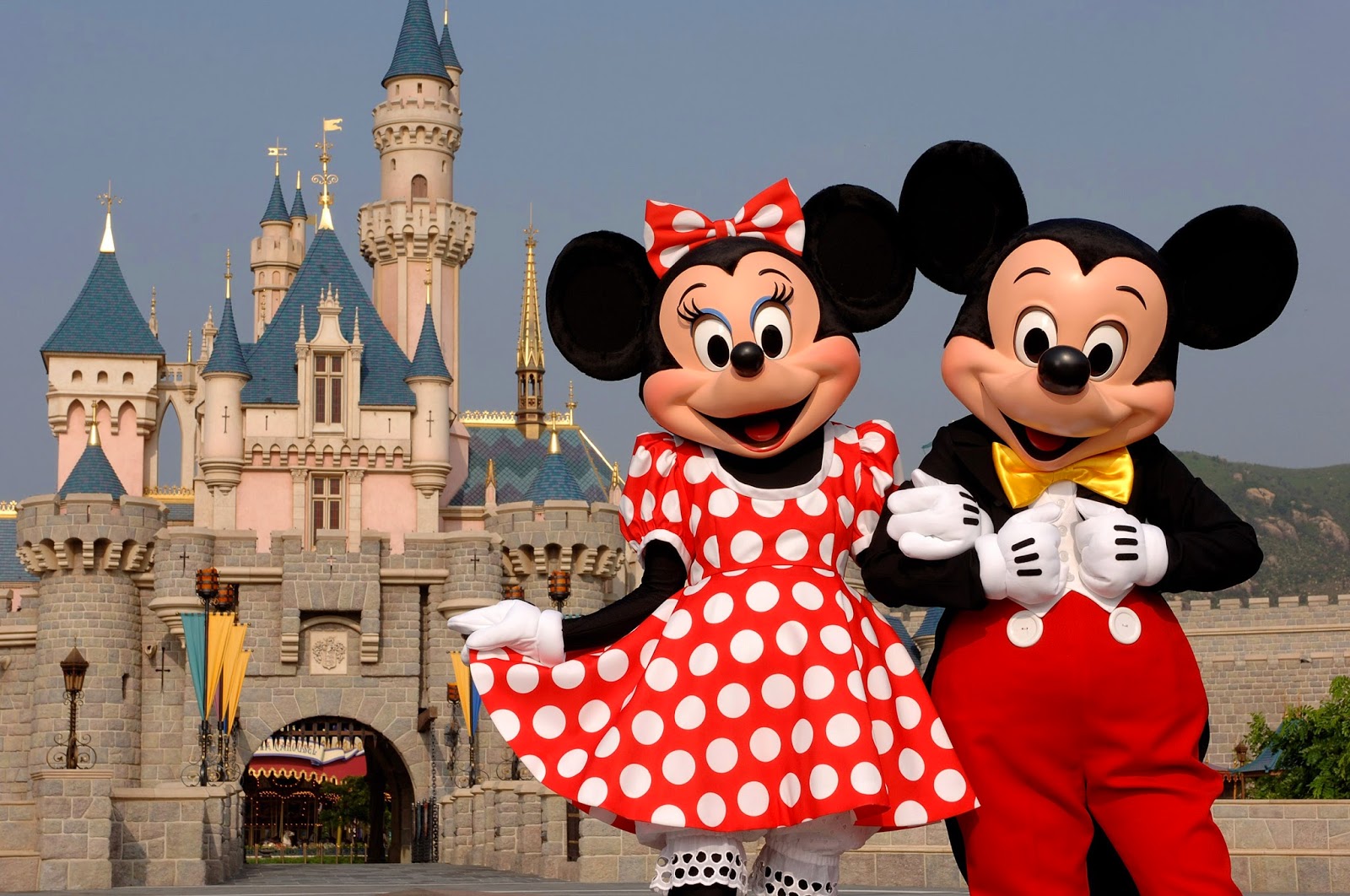 The current Mickey and Minnie costumes

2004-Present: Talking Mascots
During the 1980's and 1994, Disney started testing a new articulated version of Mickey. This allowed Mickey to open and close his mouth and blink. In 2004, Disney officially made their first Disney Live! show. This show included a talking and blinking Mickey and Minnie Mouse. Mickey and Minnie can now lib sync to audio tracks, and blink once in a while. This was done manually by the performer inside the suit. Two cables run from the head of the character to the performer's hands. One cable controls the mouth and the other controls the eyes. The performer has triggers on the index finger and triggers are very sensitive. Just a slight move of the finger and it actives the mechanism. The mouth mechanism is very simple, it works just like a bicycle break. The performer presses the trigger and the mouth closes. The performer lets go of the trigger and the mouth opens. The eye mechanism is also simple, but their's a catch. The performer presses the eye trigger and a wire pushes down the eye lids of the character and it springs right back. Here's the catch of the blinking mechanism, the performer usually sees through the character's eyes. The character's pupils are dark lenses, like dark sun glasses. When ever the characters blinks, it cuts of the performer's view. This is dangerous because in the worse case scenario the mechanism can malfunction and the eye lids wont spring back. Meaning the performer would be unable to see out of the head. Characters like Mickey and Minnie have two view points, the eyes and inside the mouth. If happens to them, the performer has another spot to see out of. Now Donald and Daisy (with these mechanisms) you can only see through the eyes; and a tiny little bit form the inside the mouth. If blinking mechanism breaks with Donald or Daisy, boy the performer is in trouble. I saw a performance online with the Daisy blinking mechanism braking in the middle of her performance. The performer was trying to lift up the eye lids with her fingers because she could not see. Luckily, Daisy made it backstage safely.


The best way to demonstrate the articulated Mickey and friends is with videos.

Try to keep an eye on Mickey's fingers.

This version of articulated characters were only seen on Disney live shows, like Disney Live!, Disney World and Disneyland stage shows. Now a days they're mega popular with Disney advertising. Every Disney Parks commercial has these articulated costumes, and it's annoying. This is annoying because when I go to take my picture with Mickey at the Disney Parks, I won't get this talking and blinking version. Mainly because is a safety hazard for the performer and because the triggers are on the fingers and if I shake hands with Mickey, I might active one the triggers. Or am I?

2010-Present: Robo Mickey!
Meeting Mickey Mouse is an exciting experience by it self, but how can Disney make this experience more magical? Have Mickey actually talk you!; and blink! Sort of!...

Remember that Disney was working on a articulated Mickey in 1994? Guess what, around the same time Disney was also working on a speech transformation system. Here's the patent. In short words, a speech transformation system allows a performer to talk into a mic and sound like Mickey's voice. In 2010 Disney finally tested this system. Mickey now can talk to you, live in person... sort of. After many tests with this Mickey, Disney decided to have Mickey say prerecorded phrases. This is disappointing, if you ask me. Because instead of Mickey saying your name and noticing your princess shirt, Mickey would say generic phrases and conversations like: hi-ya pal, hot dog, cheese, bye, ect. This is sad when someone would come up to Mickey, talk to him and the best Mickey can say is "oh boy". Kind of a let down. Personally, I prefer the standard Mickey to the this robotic, prerecorded Mickey.

One of many examples of prerecorded Robo Mickey, 2014

The articulated costumes are only used at Disneyland, Disney World and Disney Live! You will not find these versions outside the U.S. Also, Robo Mickey is currently only at Disney World; and might make an appearance at D23.

Any questions or suggestions, email me at otero.santiago@yahoo.com. Hope you enjoy this! It took me about two weeks to research and write this blog accurately. Keep checking out my blog! Because I will be writing more about character costumes through the years; like Goofy, Donald Duck, etc! This is only the beginning!